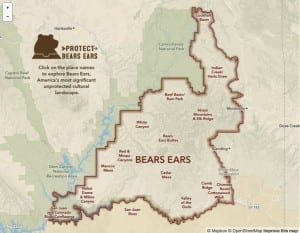 Click the map above to explore an interactive map of the Bears Ears cultural landscape. One of the more than 100,000 archaeological sites within the Bears Ears cultural landscape.

The Bears Ears Inter-Tribal Coalition proposes a U.S. Presidential National Monument designation under the Antiquities Act of 1906 to protect historical and scientific objects in Southern Utah. The area encompasses 1.9 million acres of ancestral land on the Colorado Plateau. We propose that the most appropriate and effective management strategy is Collaborative Management by the Tribes and Federal agencies.

The member tribes of the Bears Ears Inter-Tribal Coalition hold the Bears Ears immediate landscape, as well as the lands fanning out from its twin plateaus, as traditional sacred lands. This land is a place where tribal traditional leaders and medicine people go to conduct ceremonies, collect herbs for medicinal purposes, and practice healing rituals stemming from time immemorial, as demonstrated through tribal creation stories.

The Bears Ears land is a unique cultural place where we visit and practice our traditional religions for the purpose of attaining or resuming health for ourselves, human communities, and our natural world as an interconnected and inextricable whole. When we speak about health, we are not only talking about an individual, we are talking about one’s health in relation to others around us and that of the land. We are talking about healing.

Our relationship and visits to Bears Ears and essential for this process. Ruining the integrity of these lands forever compromises our ability to heal. The traditional knowledge related to Bears Ears is important and irreplaceable in itself. The continuity of indigenous traditional medicine is in peril, as long as lands like the Bears Ears are not protected.

Characterized by topographic diversity and striking landforms, Bears Ears ranges in elevation from 3,700 feet to more than 11,300 feet. Notable bordering features include the Colorado River on the west, the San Juan River and Navajo Nation on the south, and the White Mesa Ute Reservation on the East. The 1.9 million acres defined in the proposal area represent federally owned public lands, which are currently managed by the Bureau of Land Management (BLM), Forest Service, and National Park Service. Much of this land is comprised of BLM Wilderness Study Areas and Forest Service Inventoried Roadless Areas.